The following gallery of behind the scenes photos was sent to us by our good friend and photographer Kristen Deem, whose comments accompany each photo. Thanks, Kristen! 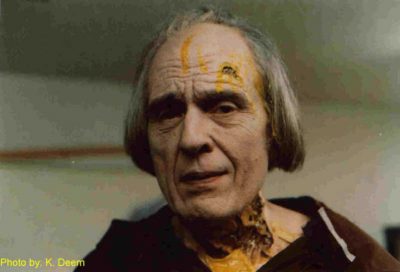 “Here is Angus at the end of a long day of filming for P2, giving me a very tired smile. This is after he’s been drilled in the forehead by a sphere and after he sprayed the whole crew with the Tall Man’s yellow blood.
Angus is wearing a dwarf robe because his costume was completely saturated with yellow blood. (February 1988).” 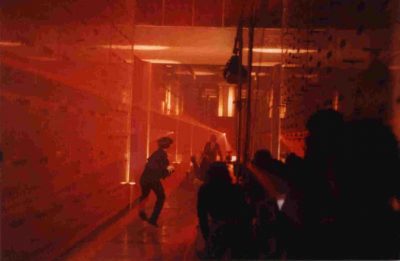 “Please credit Guy Thorpe for this photo. This was taken during the chase sequences in the mausoleum, with red laser in background and P3 crew to far right.  You see Baldwin practically leaping off the ground, the black J-sphere in  hand. Reggie is next to him. The Tall Man is in the background. A really  cool pic!” 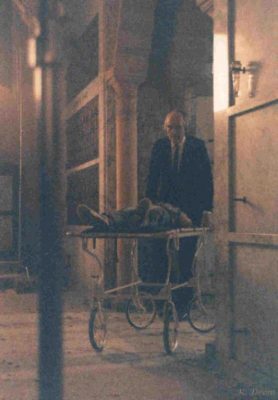 “Here’s a grainy–but moody!–shot I took of the Tall Man pushing Tim  (strapped to the gurney) around a corner in the mausoleum. This scene in P3  was ultimately edited because they didn’t feel the gurney moved well (too  old).   So… this is probably one of the rarest pics you’ll ever see of an  edited scene!” 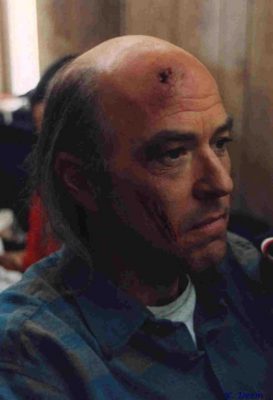 “Here’s a shot I took of Reggie getting SPFX makeup (wounds) on his face for P3. This photo was published in FANGORIA.”