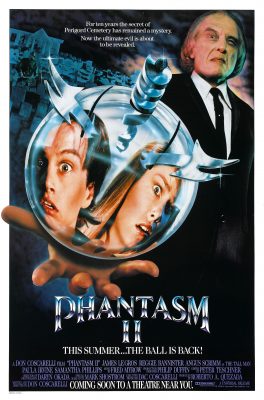 It took a full nine years since the release of the original PHANTASM film to come out with its much-anticipated sequel, PHANTASM II.

Unlike this first entry in the series, Don Coscarelli was able to find some big studio backing for PHANTASM II in the form of Universal Pictures. Though it was the lowest-budgeted picture that Universal financed in 1988, PHANTASM II was still a considerably more expensive project than its dirt-cheap predecessor.

Not having invested a lot of money into the project, and releasing the film with a rather shoddy advertising campaign against a field of summer blockbusters, Universal did not show much faith in PHANTASM II; though the film did end up making money for the studio.

Another thing going against PHANTASM II was the long period of time in-between it and the first entry. There is a good likelihood that many of the individuals who had sincerely enjoyed the original film back in 1979 had lost interest in, or simply forgotten about, PHANTASM in the nine years that had gone by. Sequels tend to do better (at least from a financial standpoint) if they can capitalize upon the success of the original while it is still a hot commodity.

But what about the film itself?

PHANTASM II is, arguably, the finest of the three entries in the series. Forsaking the surreal and dreamlike quality of the first film, director/writer Don Coscarelli opts for a more straight-ahead action approach in the sequel.

In PHANTASM II, Mike (this time portrayed by James Le Gros, an excellent actor who has gone on to appear in several other features) and Reggie (again played by Reggie Bannister, who at this point has developed into a very fine actor in his own right) take on distinctively MAD MAX-type roles, tirelessly pursuing the Tall Man.

Packing chainsaws, flamethrowers, four-barreled shotguns, power drills, grenades and other miscellaneous firepower, our two heroes are ready to kick ass in the extreme. During the course of the film, they have ample opportunity to utilize their tools on a slew of dwarves, apparitions and various other helpers of the Tall Man.

Along the way, we meet other interesting characters: Mike’s psychic soulmate Elizabeth (played by the lovely Paula Irvine), Reggie’s loopy potential soulmate Alchemy (played by Samantha Phillips) and the ill-fated Father Meyers (played by the wonderful character actor Kenneth Tigar). Meyers is a devoted priest who is forced to dance to the Tall Man ghastly tunes, and later pays the ultimate price at the receiving end of a well-equipped flying sphere. Many of PHANTASM II’s best scenes involve this priest character, adding a human element of personal conflict not seen in the other two PHANTASM films.

On a technical level, PHANTASM II is absolutely superb. It is very evident that Coscarelli had learned much as a filmmaker in-between the original and the sequel. The action in the film flows smoothly from scene to scene and the camera work by cinematographer Daryn Okada is terrific.

The special effects in PHANTASM II, both makeup and optical, are far more elaborate than in the original, and more abundant. Simply compare the dwarves and the spheres between this film and the original and see how the PHANTASM concept has matured over the years.

Also, kudos to composer Fred Myrow (another PHANTASM alumnus) for a fantastic musical score with far more depth than his score for the original film.