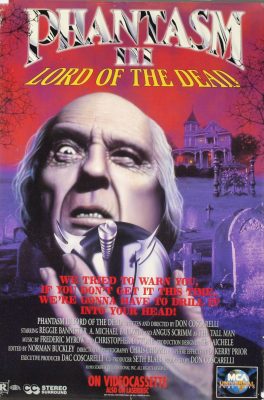 Lord Of The Dead

I’ve been a fan of the PHANTASM film series for a while now. PHANTASM I has always been my favorite film of all time. If any other film were to compete, it would be A CLOCKWORK ORANGE, but even Stanley Kubrick couldn’t create the great film Don (Coscarelli) did.

The sequels were expected to live up to some of these expectations, too. Though I have heard a lot of complaints about PHANTASM III, I believe it is a very superior film and is as great as the original was. Reuniting the whole cast again and edging it with a great plot drove me to insanity.

Here, we start off where part II left us. Mike slips into a coma at the beginning and almost dies when the Tall Man sends a henchman after him.

Shortly after, we find Mike and Reggie chasing after the Tall Man. Throughout the film, we see new characters to the series who, in some ways, make the film.

We get Rocky, an African-American female former Navy officer, kicking sphere ass. And we meet Tim, a young man Reggie encounters while on the chase of the Tall Man.

My favorite thing in this film, though, would have to be the fact that Jody is back and played by Bill Thornbury once more. Guiding his brother Mike from the dead, Jody helps Mike understand.

I won’t disclose the ending for those who haven’t seen it, but there are so many excellent surprises at the end of this film.

PHANTASM III: LORD OF THE DEAD is the best yet, with the exception of PHANTASM I.