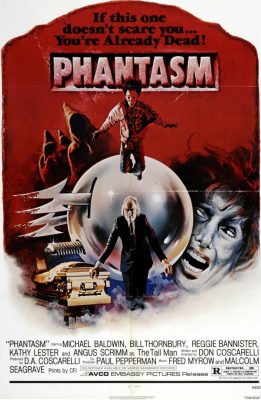 The One That Started It All

It’s hard to believe that nearly twenty years have gone by since the original PHANTASM film sent our minds into a daze. Praised by many critics, and lambasted by many others, one thing was certain regardless of whether you loved or hated the film: it moved the viewer. Whether it was to the nearest washroom to relieve a wave of nausea, or to the exit, or to the ticket booth for a refund, or to a state of cinematic delirium, PHANTASM moved you.

While, on the surface, the plot of PHANTASM is deceptively simple, underneath is a film of remarkable visceral intensity, humor and ingenuous visualization. It is the story of two brothers, Mike and Jody, their ice cream vendor friend Reggie and their battles with a legion of the undead, led by an unearthly, oversized undertaker known only as The Tall Man.

The plot of PHANTASM is best left as an afterthought, taking a backseat to the astonishing visual and cerebral experience that it truly is. Writer/Director Don Coscarelli takes the characters on a hellaciously winding trip through shifting realities, alien worlds and high-speed action movie cliches at a breakneck pace. It is the kind of film that, in its complexity, stays with the viewer long after watching it and begins to clarify after repeated viewings.

Director Coscarelli does a terrific job of translating the essence of a nightmare into celluoid. The imagery of the film is both horrifying and haunting. Witness the scenes within the white marble hallways of Morningside Mortuary as the Tall Man, a ghoulish henchman and a lethal flying silver sphere pursue our young hero Mike. The camera sweeps and sways through the halls at a dizzying pace, emulating the point of view of the flying “Sentinel” sphere as it reaches its inadvertant target; the forehead of the pursuing ghoul. The resulting geyser of gore, hilarious in its sheer abundance, is one of the classic scenes of modern horror films (and one to be repeated many times over in the subsequent PHANTASM sequels).

For the most part, the performers in PHANTASM do an adequate job with their roles. Michael Baldwin (Mike) and Bill Thornbury (Jody) pretty much walk through their roles without too much difficulty. Reggie Bannister (as ice cream man Reggie), however, is sensational in his role, as is Angus Scrimm as the foreboding Tall Man.

Prior to its release in 1978, the MPAA slapped the film with the dreaded X-rating for its violent content, but the decision was eventually overturned. The violence in the film, while abundant, is almost cartoonish in its excesses.The effects and makeup artists who worked on PHANTASM, while obviously working on a shoestring budget, turned in some truly astonishing (and graphic) work. In addition to harnessing in a rabid cult following, PHANTASM was also a great financial success for its creators and Avco-Embassy Pictures, the company that distributed the film.

Following PHANTASM, director Don Coscarelli went on to helm other projects including the solid fantasy film BEASTMASTER (starring Marc Singer) and even a nightmarish music video for the song “The Last in Line” by the heavy metal artist Ronnie James Dio. It was not until several years later, however, that Coscarelli returned to the world of PHANTASM with the long-overdue and, in many ways, superior sequel, PHANTASM II.