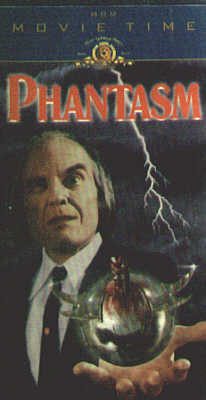 On September 1, 1998, MGM/UA re-released the original horror classic PHANTASM on home video as part of their “Movie Time” line.

Our in-depth review of this 1979 masterpiece appears elsewhere on this site, so really nothing new can be said about the film itself here. However, with this video release, PHANTASM has never looked or sounded better. The picture quality on this digitally transferred video is absolutely immaculate and the Dolby sound is sharp and crystal clear. My friends, lose those old Embassy Video copies of PHANTASM you have probably already worn out. This is the version to have!

An extra bonus of this tape is four minutes of previously unseen PHANTASM footage (unused even in the upcoming PHANTASM: OBLIVION). This material comes in a segment at the end of the tape and is not integrated into the original film that we are all familiar with. The only downside to this otherwise outstanding video release is the packaging. There is a fairly common stock photo of the Tall Man (a shot from PHANTASM II, incidentally) with sphere (And check out the drill position. Like the P2 movie poster, the drill is at the top of the sphere instead of the bottom!) on the box front. The original PHANTASM poster art was far more dramatic and inspiring than MGM’s packaging.

Run, don’t walk, to your nearest video outlet to pick up this treasure for your collection. I guarantee it will be the greatest $10 you’ve ever spent in your life!